I’m hosting guest authors through most of April and May, as I am swamped with Awesome Con DC and welcoming Baby Boy Brightley into the world. This guest post was written by Ben Blake, the author of Blood and Gold (Songs of Sorrow)

, The Gate of Angels (Songs of Sorrow)

There’s an old quote about building characters, which Stephen King attributes to Thomas Hardy. I don’t know myself, but it goes; “Compared to the dullest human being walking on the earth, the most brilliantly drawn character in any novel is nothing but a bag of bones.”

If that’s so – if we authors can never capture the complexity of a person – how can Fantasy writers hope to create a whole world? This is why there are so many support books for Lord of the Rings. It’s to fill in the blanks, holes in the background. It’s also why I sometimes use real historical civilisations to provide a template for the people I want in my invented world; it gives me a cohesive mythos, and a language, a whole culture that hangs together. I can change anything I don’t want, or dislike – the beauty of poetic license, eh? – but the framework is already there.

I’m sure other guests on CJ’s blog will have talked about world building at length though, so I won’t. All this is a lead-in to my real topic, which is the need to research your own subject, and do it properly – especially if you self-publish online. We e-publishers don’t have editors very often. We have to do their work ourselves.

If I use an ancient culture it means I’ll need its gods and goddesses, its myths, its language and customs. People will dress as they did back then, swear the same way, and so on. So I have to know all those things, and I have to keep them consistent through the novel. In The Risen King that meant learning that Celtic warriors used saddles but not bridles, that they wore striped cloaks and jewellery at the throat, and worshipped a death goddess called the Morrigan, all white skin and ebony hair. I had a character who was afraid of elves in the marshes, which people saw as faint lights at night, and which the Celts really did believe. In another story (not published yet) I have a man from a steppe people like the Ainu, who fears the northern wind and calls his horse his brother, believing that the souls of dead Riders live on in horses. I use Ainu (or Celtic) words for a lot of these concepts, to make them feel strange to the reader, and that means I need to have an understanding of the language too.

This doesn’t come easy. It’s a vast amount of work to learn all this – especially when you consider that 90% of what I do learn ends up unused anyway. But it’s what I meant earlier when I said that without editors, we have to do their work ourselves. The internet is full of writers who churn out rubbish because they just don’t check it over. I was asked once to test read the opening of a historical novel called “Hatshepsut: Egypt’s First Female Pharaoh”, the problem being that she wasn’t first– there were three ruling queens before her. To have such a bad error as that in the title was really careless work, and it’s a good example of what we ought to avoid.

I started with a saying, and here’s another at the end: it’s 99% perspiration. That’s one of the best tips for authors. Inspiration is great, everyone needs it, but all it gives you is a spark, and building up the fire is a lot of hard work. Whether we’re talking about world-building or characters, or anything else, it’s up to us to make sure the work is accurate and consistent. Test readers help – they’re vital, in fact – but in the end it’s you, the author, who’s responsible for your content.

It’s a crowded world in e-publishing, and easy for your book to sink into the mass and vanish. Getting the details right will give you the best chance to avoid that. 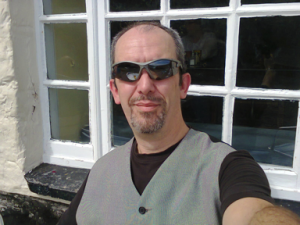 Ben Blake was born in England, and lives in Devon. I’ve written since I was a small boy, but only recently decided to publish online. My books include The Risen King, and the recently released A Brand of Fire (TROY)

, which is the first volume in a story of the Trojan War.

Away from writing, I play pool and like to hike on the moors, or cycle the bike trails.

You can find me online at the sites below;

Guest Post: How Do They Feast? Portraying Food in Fantasy and Historical Fiction

Most writers deal with writer’s block at some point in their career. It can be incredibly discouraging, and it doesn’t always result […]

Today we have a guest post on animals in fantasy from Jennifer Priester, author of the Mortal Realm Witch series. Thanks to […]

This is a really interesting article on the tension between traditionally published authors and indie authors. Link here. I chose to self-publish […]