In that overview post, I promised reviews of the books in this first noblebright fantasy boxed set, along with content notes and caveats as appropriate. The books are in alphabetical order by author’s last name in the set, but that’s not the order in which I’m reading them, so please bear with me as we jump around. I’ve linked to the books individually below, and of course you are welcome to buy them that way, but you’ll get a much better deal if you buy the boxed set! If, after reading the books individually or in the set, you are inclined to leave reviews, that would be awesome.

Light in the Darkness: A Noblebright Fantasy Boxed Set is discounted for release week! Until Friday, pay only $1.99 for all twelve novels – normally buying all of them individually would cost $$$, so get the set while it’s hot! 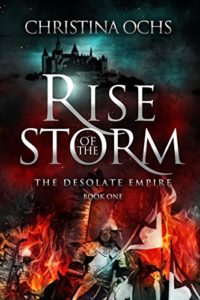 Rise of the Storm by Christina Ochs – This is the first book in Christina’s The Desolate Empire series, which is based on the 30 Years’ War… hardly what you imagine as a noblebright setting. While war is dark and the situation seems to devolve into hopelessness, the characters (well, at least some of them) are noblebright. They fight to forgive each other (even when they don’t want to) and they sacrifice to do the right thing, even when the cost is terrifying. Christina wrote a guest post for Noblebright.org on whether tragedy can be noblebright, and I think this series demonstrates that it can.The viewpoint switched between main characters at every scene, which was a little discombobulating for me – I have a distinct preference for getting very deep into a limited number of views (as is probably obvious if you’ve read any of my books) – but it was well-executed and made a lot of sense within the story. Content rating: clean but with some more mature themes.

When a renegade priest prophesies an imminent apocalypse, a conflict is sparked which will tip a continent into war.

Prince Kendryk is young, handsome and popular, his kingdom prosperous and peaceful. But in the face of the prophesied apocalypse, he must choose between conscience and power. If he chooses the side of faith, he must defy the ruthless Empress Teodora, ruler of a vast empire, imperiling kingdom and family— but if he chooses the side of power, he risks plunging his world into a darkness worse than war.

The coming conflict will touch the lives of thousands, among them…

Prince Kendryk’s adored wife, Gwynneth, the proud daughter of a king, whose ambition may come at great cost…

Braeden, a violent mercenary, commander of a legendary winged army, who will find himself in the service of an employer he must defy to protect those he holds dear…

And Janna, the merchant’s wife, forced to abandon her home and her way of life, ill-prepared to keep herself and her children safe from the ravages of war… 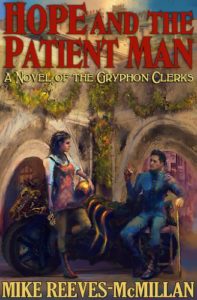 Hope and the Patient Man by Mike Reeves-McMillan -I enjoyed this as I enjoy all of Mike’s books. This is a romance in the Gryphon Clerks steampunk-magical world. Patient is indeed patient (and kind and generous), Hope is adorable (and frustrated and confused), and they are obviously a good match. But the curse is real, and confronting it challenges them to grow as individuals and as a couple. I’m embarrassed to admit that I haven’t read Hope and the Clever Man, the second book in the series yet, but this book can indeed stand alone. However, I need to go back and read the previous book, because I love Dignified Printer and want to read his story now. Content rating: for adults and perhaps older teenagers.

When a promising date ends in head trauma and ruined trousers, Hope must confront the curse she accidentally placed on herself at the end of her first relationship. But can she do so while also qualifying as a Senior Mage, solving the mystery of her parents’ toxic marriage, and helping two awkward friends communicate – all while periodically blacking out?

A love story, with engineering. About – and for – smart, nerdy women and the men who adore them.

Content warning: While it does not depict sex directly, this book does contain “adult situations” and what one reader has described as “delicate eroticism”. If you are uncomfortable with these elements, this isn’t the book for you.

Place in the series: This is a direct sequel to Hope and the Clever Man and picks up where that book leaves off, but it can be read as a standalone. 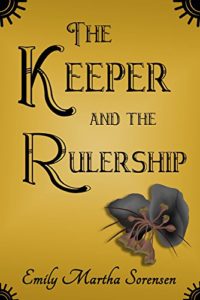 The Keeper and the Rulership by Emily Martha Sorensen – I’ve just started reading this and am already enjoying it. I’ve read some of Emily’s writing for younger readers, and it was all charming, so I’m looking forward to seeing how this story continues. Content rating: squeaky clean

In a world where both magic and mathematics are forbidden, Raneh is growing magic and she can’t seem to stop. She’ll face the death penalty if anybody catches her, so she hides it in the weeds of her family’s land, pretending to be a typical eighteen-year-old heir. And it works.

Until the Ruler comes to visit.

Now, with the purpose of the Ruler’s visit a mystery and not only her safety but her family’s reputation in danger, she has to find a way to do the impossible:

On the Shores of Irradan by Ronald Long – I confess I haven’t started this one yet. Content rating: Squeaky clean.

Fans of the Lord of the Rings will love a new epic series by Ronald Long.

Ealrin Belouve, a man with no memory of his past, seeks the peace of a new land. After the ravages of war in Ruyn, he and his companions search for a legend in the mythical realm of the elves.

But their respite is short lived. The ever present dark comet heralds a new threat. The Empire of Enoth, an ancient elven kingdom, travels uninvited to the human lands of Darrion. As they extend a hand of friendship, a sinister plot begins to unfold.

Once again, Ealrin and his friends are catapulted into determining the fate of a continent. But can the Everring Tree restore their lost magic and heal the land before war consumes them all? 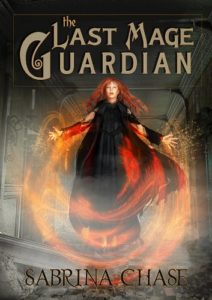 The Last Mage Guardian by Sabrina Chase – Sabrina’s work was recommended to me by Mike, so I’m really looking forward to diving into this one.

Her great-uncle, the mage Oron, bequeathed to her his oak-shaded chateau and a debt of magical honor. But in a world where women do not do magic, Miss Ardhuin Andrews must hide her magical talents. How can she repay the debt? When Oron’s enemies attack, how can she survive? Political intrigue, duty, and echoes of an old war not truly ended combine to create a smoldering crisis in a world where magic and science coexist. 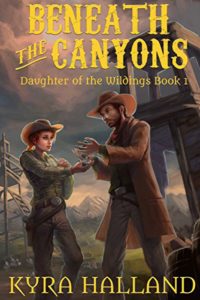 Beneath the Canyons by Kyra Halland – I’m looking forward to this one! Content rating: for adults and older teens

Cowboys and gunslingers meet wizards in this high fantasy series inspired by the Old West. Silas Vendine is a mage and bounty hunter, on the hunt for renegade mages. He’s also a freedom fighter, sworn to protect the non-magical people of the Wildings from ambitious mages both lawless and lawful. It’s a dangerous life and Silas knows it, but when he comes to the town of Bitterbush Springs, he finds more danger and excitement than he bargained for…

In Bitterbush Springs on the trail of a dangerous rogue mage, Silas meets Lainie Banfrey, a young woman both drawn to and terrified of her own developing magical powers. Though Lainie has been taught all her life to hate and fear wizards, she and Silas team up to stop the renegade who has brought her hometown to the brink of open warfare. The hunt takes them deep beneath forbidden lands held by the hostile A’ayimat people, where only Silas’s skills and Lainie’s untamed, untrained power can save them from the rogue mage and the dark magic he has loosed into the world.

Book 1 of Daughter of the Wildings, western fantasy romance for adults and older teens. 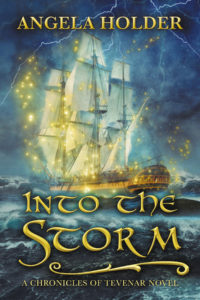 Into the Storm by Angela Holder – There’s no link there because this book isn’t out yet (so the boxed set is the only way to get it!). This is a prequel novel to Angela’s The Fuller’s Apprentice, which I enjoyed. The Fuller’s Apprentice is YA, and this is probably a more adult novel, but still very clean. The world of Tevenar is incredibly noblebright; it’s far from utopian, but it’s full of people who strive to be kind and generous, even when it costs everything. Content rating: PG-13

Larine’s life is good.  She loves her work as a wizard, her best friend is the Guildmaster, her troubled son is finally thriving, and she’s together at last with the man she’s dreamed about for years.

Then one hot, sunny, late summer afternoon, a warning arrives.  A giant storm is heading straight for Elathir, threatening everything Larine knows and loves. The Guildmaster has a plan to save the city, but it will require unimaginable sacrifice.

Larine and her fellow wizards face a terrible choice. Some will live and some will die. For unless enough wizards volunteer to spend their lives to turn aside the storm, thousands of people will perish beneath the wind and waves.

The 3D image above is for Amazon, but we also have this lovely one for B&N and other retailers who prefer a flat image.

The Lord of Dreams – now up for pre-order!

One of the first scenes was posted here (you may wish to read it first). This is a slightly later scene in the urban […] 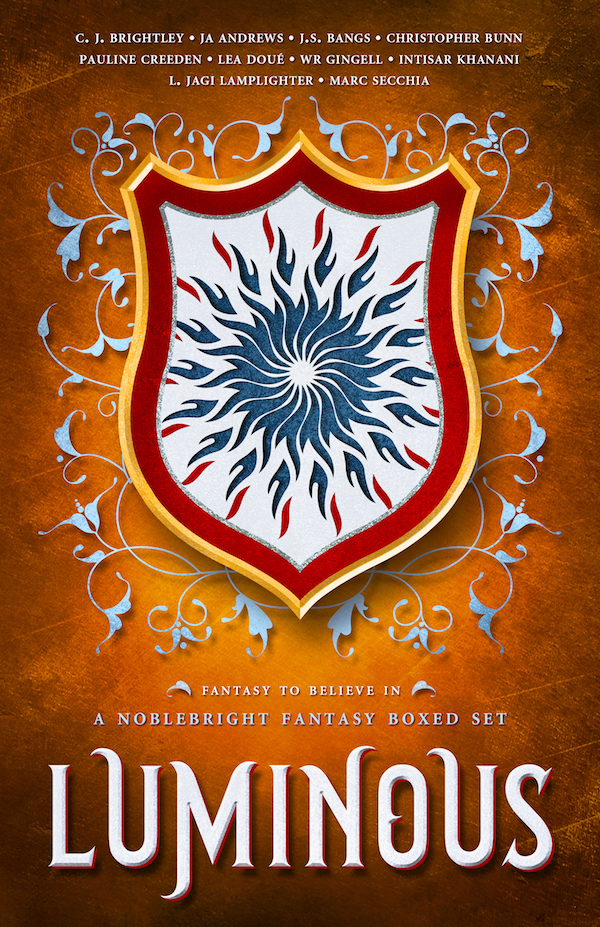 The authors of Luminous, including yours truly, are celebrating the release of the boxed set with a series of interviews and a […]

A new novel idea struck me a couple days ago and I’ve been working on it nearly non-stop. It’s in a different […]